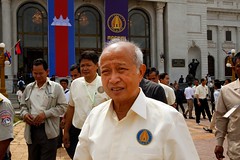 Independence Monument (Vimean Ekareach) was built in 1958 as a memorial to Cambodia’s independence from France in 1953. The Monument was designed by Vann Molyvann, an influential Cambodian architect, he has also designed the Olympic Stadium and many other buildings from the 1960-70s in Phnom Penh. Independence Monument is designed in a Angkorian style, shaped as a lotus-shaped stupa that consists of five levels and every level is decorated with snake heads. The monument is at its most impressive later in the afternoon when the shadows are highlighting the complexity of the design. At night time, the monument is beautifully lit up by red, blue and white floodlights, representing the colors of national flag. You will find Independence in the intersection of Norodom Boulevard and Sihanouk Boulevard in the centre of the city. At the 9th of November every year Cambodia celebrates its Independent day, during this celebration the Independence Monument is the center of the activities. A ceremonial flame is lit on pedestal inside the monument by a royal representative or a high official, and floral tributes line the stairs.

Walking in the monument is not permitted but its best view from across the street.