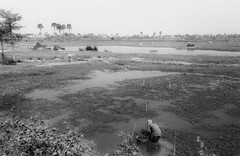 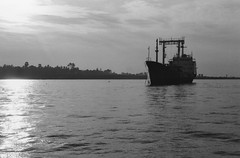 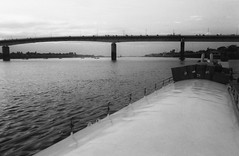 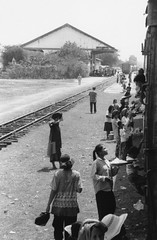 Today as the rain suddenly began to pour we ran for what shelter we could find in the Phsar Chas Market on Street 13. We navigated the market passageways beneath the makeshift plastic roof, the small alleys quickly filling with water. We jumped from one patch of higher ground to another, shrieking each time a hole in the plastic let the rain run down on us. As we made our way towards the center of the market, we came across an old woman sitting on a couple of boards begging; the rivers of water washing across her feet.  We all huddled together to wait out the storm and she began to tell us her story. Her name is Ken, she is 74 years old and has been begging in Phnom Penh for four days. She was once married, but her husband and her four siblings were all killed under the Pol Pot regime, leaving her alone to support her young daughter. When Ken’s daughter was old enough she married, which helped their financial situation until three years ago when her husband “was not cured in time” and died. Ken and her daughter share a small parcel of land, enough to supply one bag of rice per season, however Ken and her daughter, now 40, are both in poor health and are not able to work the land. Ken’s daughter now works as a garbage collector in Stueng Mean Chey Commune, and when Ken is well enough and can afford to make the trip she comes to Phnom Penh to beg. On a typical day in Phnom Penh Ken receives between 5,000 – 7,000 Riel. (About $1.50)  It costs her 2,500 Riel to sleep at the train station, leaving about 2,000 Riel ($0.50) for dinner.  She has no breakfast, and eats lunch only when she can afford it.

Sometimes the rain became so loud, pounding against simple roof that we could not hear each other over the storm. In these moments she would look at us with a smile, the lines beside her eyes spreading into her grey hairline, and her hands folded at her chin in a way that seemed to imply both please and thank you. As the storm began to subside and we stood to get back on our way, we had a quick conversation amongst our group. It was decided. We handed her a $5.00 bill. She stood to accept it, and bowed graciously, but then shyly told us she didn’t know how to convert it into Riel and asked if we had Riel instead. We told her she could buy food and they would change it for her. And then, though she had thanked us most sincerely, we realized she couldn’t know how much this was worth. “This is 20,000 Riel, thank you for talking with us.” We all stood in a circle and she looked at us, taking our hands in hers, thanking us each one by one.

Five dollars is more than most would typically give to someone begging, in fact, I typically do not give at all.  Children I want to encourage to go to school, not to beg, so I support them via The Ponheary Ly Foundation, but hearing Ken’s story as we all stood there in the rain, and feeling the warm sincerity of this woman made us all think twice before saying no to the older people begging.